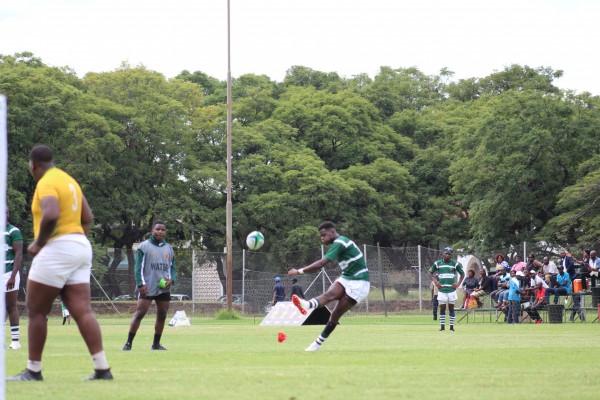 Zimbabwe came from 6-10 half time deficit against Ivory Coast, a quick change in the homeside’s game plan gave them a comfortable 26-10 win celebrated under a light rain shower.

The win means Zimbabwe will play against Madagascar in a decisive final that will determine which team will be promoted into Group A.

Madagascar had a flawless run at Morocco trouncing them 65-0, the Madagascans used brilliant backline and open play which was too much for the Moroccans to handle.

Zimbabwe’s head coach Farai ‘Bob’ Mahari says despite his charges falling back in their first half, they remain confident ahead of a meet up against Madagascar.

“We remain confident ahead of our game against Madagascar, at our half time I told the boys not to forget who we are and what we came here to do. The minute we did that it was a different game all together.

“Ivory Coast came to play hard and they did not come here to make up numbers. The goal for us was to get into the final game and that is what we did,” said Mahari.

Ivory Coast and Morocco will have to battle each other to avoid relegation into Group C.

The Barthes Cup is the first since Rugby Africa’s recent affiliation with Société Générale, the official partner for the development of rugby in Africa.

This represents a real breakthrough for the image of African rugby and, in particular, for rugby played by young people.

In the spirit of rugby all four team took time to observe a minute of silence in honour of the victims of Cyclone Idai which affected 2.6 Million people in Mozambique and Zimbabwe.

Zimbabwe Rugby Union Sifiso Made said the teams were touched by this devastating natural disaster and the gesture is shows how sport can bring people together.

“The teams and the organising committee came together and this show how powerful rugby is in uniting communities in distress. As a rugby union we also took the opportunity and established a collection centre for donations to assist affected families.

“It touches my heart when I see Under-20 players spearheading such honourable gestures and the world and other young people will be inspired to come together in future events,” said Made.