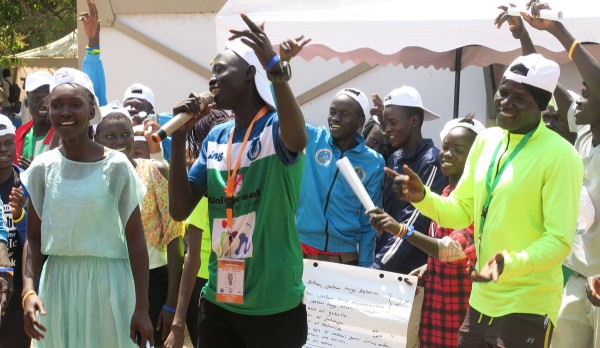 More than 500 young people were enticed to leave their homes across South Sudan and converge on the capital Juba to use their creative skills to raise awareness about the need for lasting peace during a special event to promote national unity.

Young people suffered immense harm during the five-year civil war that erupted in South Sudan in 2013 with many killed, injured or forced to flee their homes during the violence. Young women and girls were particularly affected by rape and other forms of sexual violence, early and forced marriage, and denied access to healthcare and education.

The 500 younglings who came together at the National Unity Day event, sponsored by the United Nations Mission in South Sudan and the United Nations Development Programme, in partnership with local artistic group Ana-Taban, used music as a common language to express their feelings.

“We need peace. No for war, yes for peace. I’m tired of discrimination,” rapped Aliay Yak from Malakal.

Eighteen-year-old Katrine Gabriel, a secondary school student from Bor, expressed her desire for women’s rights to be respected, visually through artwork.

“Stop forced and early girl marriage. Support girl child education for peace and development,” was the slogan of her painting.

During the event, the Head of the National Pre-Transitional Committee’s dissemination unit explained the contents of the revitalized peace agreement, signed in 2018, to the young people so that they can fully participate in the peace process.

UNMISS representatives also urged the attendees to become ambassadors for peace as the country’s future leaders.

“You need to reflect what you have learned and shared about diversity and peace when you go back home,” said Kami Firmin Adjahossou, an UNMISS civil affairs officer.