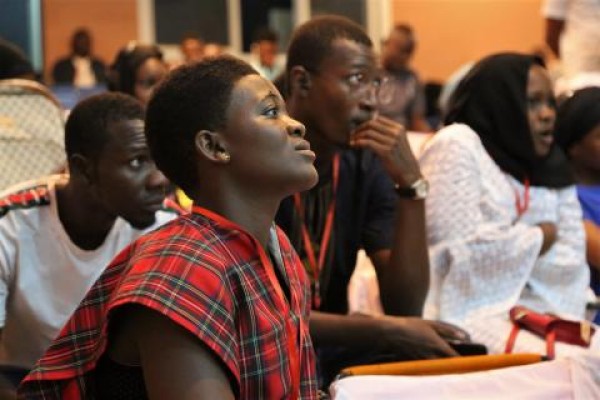 “This training has been both a challenge and a relief,” said Adaora, a Nigerian woman staying at IOM’s transit centre in Niamey. “It’s inspiring to see women who have been through worse things than I have, opening up and talking about their experiences. Abuse makes you feel very alone, but if we speak up, we can join forces and make a difference.”

Adaora is one of the 40 women who participated in a 100 per cent female slam poetry workshop organized by the International Organization for Migration (IOM) and the local collective Plumes du Sahel to mark the International Day for the Elimination of Violence Against Women (25/11).

“We know that women have important things to say about society and the way society sees them, but we also know that women's voices are often silenced,” explained Isaac Oumarou Manan, president of Plumes du Sahel.

“By initiating women in the art of slam, we are campaigning for their empowerment through freedom of expression.”

This 10-day workshop called upon 30 young female artists from two high schools in Niamey – Lycée Mariama and Lycée Korombé and ten women migrants currently staying at IOM transit center to share their thoughts on gender equality, domestic violence and other forms of violence towards women, and to promote women’s rights, through spoken word performances.

“As women, we don’t often get the chance to get on stage and say what is on our minds,” said Nafissa, one of the youngest participants. “I think I have a lot to say and expressing my feelings through slam poetry has taken away much of the fear I had of public speaking and opening up.”

Like Adaora, many of the women migrants embarking on this migration journey experience various forms of gender-based violence and abuse during their trip, such as rape, most often at the hands of traffickers and smugglers. In 2019 alone, IOM’s mission in Niger assisted 85 victims of trafficking, who were tricked into leaving their countries of origin with false promises of better lives abroad.

“Migrant women are particularly vulnerable to violence and abuse, so it is important for IOM not only to sensitize migrants and the general public on this issue, but to also give these women a platform to speak their minds,” said Barbara Rijks, IOM’s Chief of Mission in Niger. “The workshop has given this vulnerable group a platform to talk about things they wouldn’t normally share without fear of retaliation.”

The workshop will conclude with a slam poetry show on December 5 at the Centre Culturel Franco-Nigérien (CCFN) in Niamey when all the participants will perform live in front of an audience.

The event is organized under IOM’s fourth edition of the Global Migration Film Festival (GMFF) with support from the European Union, within the framework of the Migrant Resource and Response Mechanism.

The association Plumes du Sahel is a collective of young slammers and poets created in 2015 by the group ART PLURIEL. Its mission is to promote public speaking in all its forms, in the media and in schools, while actively involving women in the process.

Distributed by APO Group on behalf of International Organization for Migration (IOM).