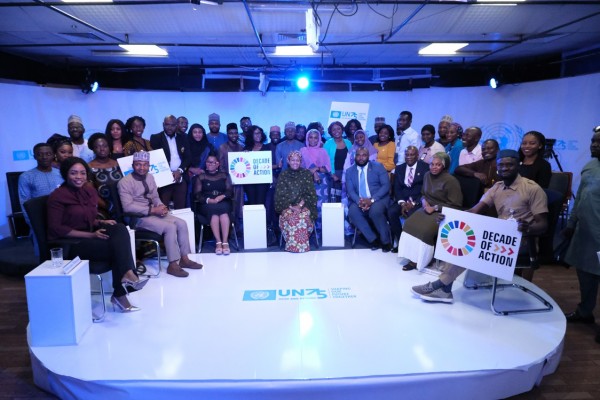 Following the global launch of the UN75 initiative – the world’s biggest conversation on the future we want, by the United Nations Secretary-General Antonio Guterres on 1 January 2020, the UN Deputy Secretary-General Amina Muhammed, on 11 February 2020, held a UN75 Youth Dialogue with young people in Abuja Nigeria.

The dialogue which was organised by the UN Information Centre (UNIC) Nigeria, in collaboration with Channels Television, involved thirty-six young people reflecting the diversity of the Nigerian nation. To spark the engagement, the Deputy Secretary-General noted that the dialogue was part of the largest, most inclusive conversation on the role of global cooperation in building a better future for all; and asked, “Overall, do you think people in 2045 will be better off, worse off or about the same as today?”

The youths acknowledged that the “United Nations is now listening more than ever before.” However, they cautioned that unless young people of today are given the space to express themselves and are involved in the process of finding solutions to issues that affected them, a better life in 2045 would be a mirage. “A new world is possible. Youths are ready. We just have to take the space,” said one of the young persons and Ms Muhammed agreed that young people have got to take the space. “Leadership is not about age. It can come from anywhere,” she added.

Prompted by Deputy Secretary-General to picture the world in 2045, when the UN would turn 100, and state things they would want to see, the youths responded: “By 2045, we want Nigeria to have transited to renewable energy for electricity generation.”; “By 2045, we should be leading and older persons listening and providing guidance.”; “By 2045, youth should not only be speaking, but driving national development”.

Furthermore, they noted that by 2045, the environment should be better; climate justice should be done, with cleaner air and sustainable transportation. “The United Nations should open more windows through which young people could look into the UN.” They demanded.

Summarising the ‘one thing’ they would like the Deputy Secretary-General to take back to Secretary-General Antonio Guterres, the youths highlighted the need to amplify youth voices; promote more vigorously, the United Nations Security Council Resolution 2250 (UNSCR1325) on Women, Peace and Security; United Nations Security Council Resolution 2250 (UNSCR 2250) on Youth, Peace and Security; Climate change prevention and impact mitigation; and more awareness of the SDGs at the community level, among others.

Through this UN75 youth dialogue and others around the world, the UN aims to build a global vision for the year 2045, the UN's centenary; to increase understanding of the threats to that future; and to drive collective action to realize that vision. In combination with global opinion polling and media analysis, the outcomes from the survey and dialogues will result in a first ever-repository of crowd sourced solutions to major global challenges.

The views and ideas of ‘we the peoples’ will be presented by the Secretary-General to world leaders and senior UN officials at a high-profile event on 21 September 2020 to mark the UN’s 75th anniversary.

All the youths took the UN75 the 1-minute survey before the dialogue started.