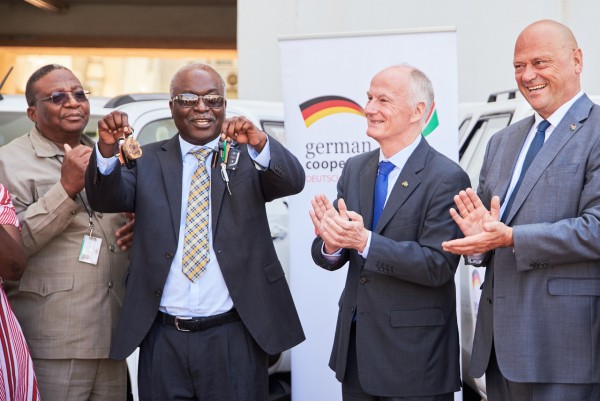 German Ambassador to Namibia, Mr Herbert Beck, officiated a handover ceremony of more than N$ 2 million (approx.127 000.00€) in vehicles and IT office equipment to the Ministry of Agriculture, Water and Forestry’s – Directorate of Forestry (MAWF), as well as the University of Namibia.

The donation was made by the German Government, through the Deutsche Gesellschaft für Internationale Zusammenarbeit (GIZ) and forms part of a wider cooperation between the two governments on the promotion of bush control and sustainable biomass use in Namibia. In close collaboration, MAWF and GIZ have implemented the Bush Control and Biomass Utilisation (BCBU) Project since 2014.

The donation includes three vehicles intended to strengthen monitoring and law enforcement capacities of the forestry authority in selected priority regions. In these regions, which are among the most severely affected by bush encroachment, the offices of the Directorate of Forestry are further equipped with computers and stationaries. The equipment support enables the Directorate to effectively implement an ongoing re-engineering process, which among others includes the digitalisation of its service delivery. The Directorate will increasingly rely on satellite images and aerial photos for farm inspections and will pilot a digital system for harvesting permit applications. This is meant to reduce the cost and turnaround time of the Directorate’s permitting process and in turn increase its reliability and efficiency.

In an effort to strengthen support services for the vibrant bush biomass sector in Namibia, further donations are made to selected partner institutions. As part of the handover, the University of Namibia (UNAM), Department of Animal Science, received a laboratory incubator for analyses of bush-based animal fodder samples. Due to the continuing drought, hundreds of farmers have resorted to producing bush-based emergency fodder in 2019. Dedicated laboratory capacities shall help to improve the quality of the respective feed mixtures. In the same vein, also the Directorate of No. 01/2020

Agricultural Research and Development (DARD) of MAWF, is set to receive laboratory equipment. DARD already offers testing of biomass samples to the public and will strengthen this service with the new analytical equipment.

German Ambassador to Namibia, Mr Herbert Beck, points out in his remarks: “Namibia and Germany enjoy a long-standing history of cooperation. This handover affirms the mutual dedication to address developmental challenges, stimulating sustainable and equitable growth, creating jobs and providing equal opportunities. The Federal Republic of Germany has supported the Ministry of Agriculture, Water and Forestry through various programmes; among others in the areas of conservation agriculture, agricultural advisory, and rangeland management. As of recent, the German Government has especially strengthened its efforts to foster the drought resilience of the Namibian population. In this context, the utilisation of bush biomass, for example for bush-based animal fodder, plays a vital role.”

At the occasion, Dr. Thomas Kirsch – Country Director of GIZ in Namibia, highlighted the close cooperation with the Ministry of Agriculture, Water and Forestry, which serves as custodian of the Bush Control and Biomass Utilisation Project. According to Dr. Kirsch “more than 30 million hectares of rangeland is affected by bush encroachment in Namibia, which is more than two thirds of the country”. He elaborated that a key achievement of the project has been that “bush is no longer seen as a problem, but as an opportunity.” The sustainable use of bush biomass creates, economic potential along various biomass value chains. Today, thanks to professional industry structures and accelerated by the ongoing drought, the biomass utilisation sector employs some 10,000 workers. Growth at Home is achieved in value chains, such as charcoal, animal fodder, biochar and energy production.

Mr. Hailwa, Acting Executive Director and Director of Forestry, stated that the equipment will come in support of two priority areas, namely law enforcement and monitoring of bush harvesting operations, as part of the Directorate’s mandate to effectively regulate forest resource utilisation. The vehicles will be used to carry out timely farm and site inspection where harvesting and processing of bush biomass is done, to ensure that correct procedures are followed. Mr. Joseph Hailwa further emphasised that the Ministry is pleased with the support of the German government, which comes in support of the realisation of Namibia’s development goals.

Distributed by APO Group on behalf of German Embassy in Windhoek.