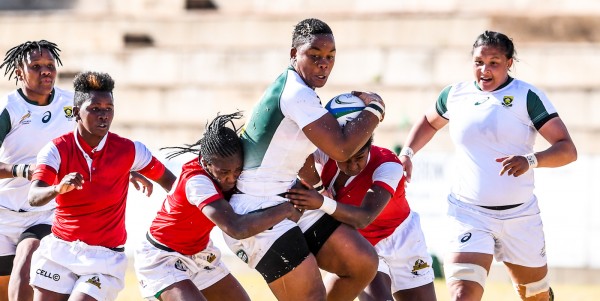 The rugby-playing pathway provided by SA Rugby (www.SARugby.co.za) for South African women has passed a notable a landmark with a first professional contract for a female XV-a-side player.

Springbok Women’s prop and 2019 captain, Babalwa Latsha, has added another feather to her rugby cap by joining Spanish club SD Eibar Femenino on a three-month contract – which runs until the end of their season in April – with an option to renew.

Latsha – who led South Africa to qualification for the 2021 Women’s Rugby World Cup last season and in the domestic Test matches against Scotland and Spain – will not be lost to the Springbok Women’s team however, as her contract enables her to fulfill her national commitments.

While Springbok Women’s Sevens players have been contracted to SA Rugby for six years, Latsha’s signing is a significant first for the XV-a-side game.

The contract underlines the growing prominence of women’s rugby in the global sporting landscape and the playing opportunities provided by SA Rugby.

“It is a massive achievement for any rugby player to earn their first professional contract, and to achieve this is in women’s rugby is a particularly remarkable feat,” said SA Rugby CEO Jurie Roux.

“Women’s 15-a-side rugby is still an amateur sport in South Africa mainly due to the lack of sponsorship and funding, but despite this Babalwa has proved that with passion and dedication anything is possible.

“Given her academic achievements and her success on the field she is a true inspiration to many young rugby players – both female and male – as she has shown that nothing is impossible regardless of one’s background.”

Latsha, who hails from Khayelitsha in Cape Town and holds a LLB-degree, started playing rugby in 2014 and her meteoric rise has seen her advance from the University of the Western Cape’s Women’s Sevens team to the Western Province women’s team and then the Springbok Women’s team.

She had her first taste of international rugby in 2017 when she toured the UK with the SA Select Women’s team where they faced the British Army and the England Academy team, and went on to represent the Springbok Women’s Sevens team in the Rugby World Cup Sevens in San Francisco in July that year.

A year later she made her Springbok Women’s debut on the team’s tour to the UK, and making this achievement even more memorable, she had the privilege of leading the team in the Test against Spain.

With regular Springbok Women’s captain Nolusindiso Booi having been ruled out last season with a foot injury, Latsha led the team, and made her presence felt with her physicality and high work rate on the field, as well as off the field.

Latsha was delighted about her new adventure and she encouraged the corporate sector to back women’s rugby in South Africa, saying: “This is an exciting new venture and a dream come true for me, and I will certainly continue to give my best for my new club and my country.

“We have a fantastic pool of talented players in South Africa and my wish is to see many of them become professional rugby players. Obviously this requires sponsorship and partnerships, so I would like to call on corporates to invest in women’s rugby so that the true potential of our players can be realised.

“The only way women’s rugby can reach the level at which the overseas clubs and national teams are playing is with solid backing, and that combined with the wealth of talent in South Africa will contribute to a successful product on the field in future,” she added.