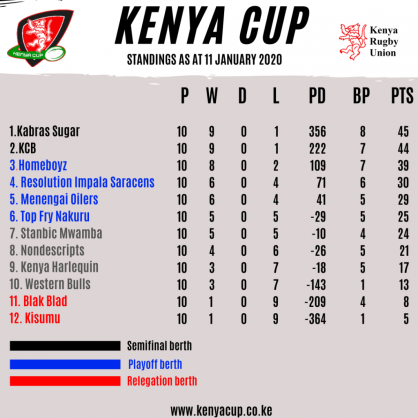 The match day 11 fixtures for Saturday 18 January 2020 are no exception, especially when you consider the fact that only four points separate the teams in sixth and eighth positions with the playoffs looming large.

The battle between fourth and fifth takes place at the Impala Club where another duo of playoff chasers, Resolution Impala Saracens and Menengai Oilers face off while eighth placed Nondescripts host co-tenants Homeboyz in the Jamhuri Park Derby.

Nondies posted a big 41-10 win away to Western Bulls to keep their playoff chances alive while Homeboyz, enjoying a rich vein of form this season consolidated third place with a 32-22 win over Impala at the same venue last weekend.

The outcome of these three fixtures will certainly impact the final playoff positions and each one of them is certainly worth watching.

There is an equally important fixture at the league's lower spectrum and it takes place at the Kenyatta University where eleventh placed Blak Blad face tenth placed Western Bulls. A bonus point win for Blad, assuming that they get to deny Bulls a losing bonus will draw them level on points with their opponents from Kakamega.

Leaders Kabras Sugar will play at home to ninth placed Kenya Harlequins who had a challenging campaign thus far while second placed defending champions KCB are away to bottom of the table Kisumu.

The North Rift city of Eldoret will host a KRU Championship double header at the University of Eldoret ground on Saturday 18 January 2020.

Runaway leaders Strathmore Leos who have won all ten of their outings to date will play against eighth placed Eldoret RFC in the early kickoff.

With six rounds of action left in the league phase, Strathmore Leos are all but assured of home semifinal qualification as they seek to make a quick return to the Kenya Cup.

Eldoret who last played in the Kenya Cup during the 2013/14 season are four points off the final playoff berth and are faced with the unenviable task of trying to upset  Strathmore.