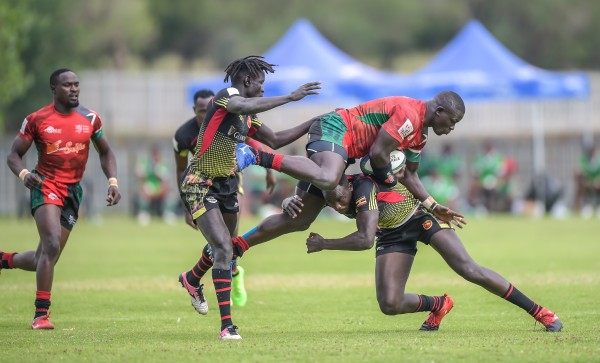 The second day of the 2019 Rugby Africa Men’s Sevens which was sponsored by Société Générale has come to an end on Saturday and so did the tournament. The continental competition was hosted by the South African Rugby Union and organised by Rugby Africa (RugbyAfrique.com).

Kenya were crowned champions after securing a 29-0 victory over their neighbours Uganda in an entertaining final, while Zimbabwe finished third in the tournament. Uganda and Zimbabwe will both participate in a qualification tournament for the HSBC World Rugby Sevens Series and they also qualified for the Olympic repechage tournament which will be played in June next year.

The matches started at 09h00 on Saturday with Tunisia securing a 28-7 victory over Botswana. Morocco were up next with a 10-7 win against Ghana, while Nigeria succumbed to a 19-12 defeat to Zambia and Zimbabwe secured a hard-fought 15-12 victory over Madagascar in an enthralling match. Namibia then recorded a 38-19 win against Senegal, before Kenya defeated Uganda 24-7 in the East African Derby to wrap up the first round of games.

The defending champions Zimbabwe were defeated 21-12 by an impressive Uganda side in the first cup semi-final, while Kenya proved too strong for Madagascar in the second semi-final match as they won 40-14. Zimbabwe went on to secure a third-place finish after beating a stubborn Madagascar side 24-7 in an exciting match. Kenya were very dominant in the final as they clinched the trophy after thumping Uganda 29-0.

The trophy was handed to Kenya’s captain Andrew Amonde by Lionel Reina, CEO of APO Group, the main official sponsor of World Rugby’s African association, Rugby Africa. “We congratulate the Kenyan team on its stellar performance throughout the two tournament days. It is great to see that Kenya will join South Africa in representing Africa at the Olympic Games, and maybe Uganda and Zimbabwe can also grasp another chance. We wish them best of luck in Tokyo 2020 and look forward to watching many more exciting continental tournaments,” said Nicolas Pompigne-Mognard, Founder and Chairman of the APO Group, Rugby Africa’s main official sponsor.

“The boys played very well. We had a plan of how we wanted to play in this tournament. The players worked very hard throughout the competition. They trained for 11 weeks nonstop. So, I am very proud of them. We will take a break, then prepare for the 2019/20 World Rugby Sevens Series.”

“We finished seventh in the last Olympic qualifying tournament (2015 Rugby Africa Men's Sevens). Today we finished second after falling short against a very good side. However, we have another shot at qualifying at the Olympic repechage tournament, so we will continue to work hard.”

“It was a tough tournament, but I am happy that with each game we played better. However, there is still work to be done in this team. The fact that we are progressed to the next round of the qualifiers, for me, I have ticked a few positives from this tournament.”

Distributed by APO Group on behalf of Rugby Africa.